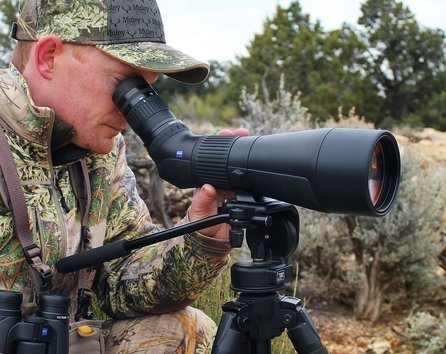 As many of you may already know, the Zeiss Conquest HD binocular lineup, which includes the very popular 15x56 and 10x42 models, is about as good as it gets when it comes to getting the most for your money. Both of the previously mentioned binos are better than any other near their price points, and they both rival the performance of far more expensive pieces of glass. Since we first heard about the possibility of a new spotting scope in the Conquest HD line from Zeiss several years ago, we’ve been impatiently waiting for its arrival.

With a sleek, new-looking design, the Conquest Gavia spotting scope is an impressive piece of glass, long before you even look through it. The protective armor is top-notch, and certainly has the look and feel typical of all optics made by Zeiss. With a lightweight, magnesium housing, it’s obvious that the construction is something that is built to last, and the ergonomics are very practical and user-friendly.

The magnification ring is on the eyepiece and has a very smooth and solid turn. There’s enough resistance that you can be sure the magnification will be right where you left it. The focus ring is large and smooth, and as you can tell from the images, it’s integrated around the body of the scope – a concept that you see most quality spotting scopes gravitating towards. It’s a big improvement over focus knobs that protrude out of the scope and tend to get snagged when going in and out of your pack. The focus is very slow and fine, making it easy to dial in a crisp, beautiful image. Another feature I find very useful is how the Gavia will attach to many tripod heads without the need of an adaptor plate. Like I said before, from the second you pick it up, the Gavia has a very “quality” feel to it.

More impressive than the construction of the Gavia, is its optical performance. Much like the Conquest HD 15x56 binoculars, this spotting scope is substantially better-performing than others near its price point. Many hunters are searching for the most performance for the money, and they’d be making a big mistake if they didn’t check out the new Gavia.

The same developer who designed the Conquest HD binoculars was hard at work while working on this new spotting scope. The Gavia features a zoom range of 30-60x. While this may seem like a lot of power to start with, I’ve found that around 30x is where a large portion of my observation takes place with a spotting scope. And, the wide-angle eyepiece has a large field of view, which compensates for the higher magnification. Even though there may be a few perceived downsides to starting with that high of a magnification, the benefits far outweigh them. By starting higher, and not all the way down at 20x, the image quality is much better on the top end of the zoom. You’ve probably experienced how most spotting scopes lack clarity and brightness when sucked all the way in, but the Gavia retains its image quality to a very impressive degree at full magnification.

With an impressive build and fabulous optical performance, the Conquest Gavia 85 spotting scope offers a sleek yet rugged piece of equipment that is a great value with more than impressive performance. You’ll find them at a retail price of $1,999 and if you haven’t checked them out yet, you’re missing out!