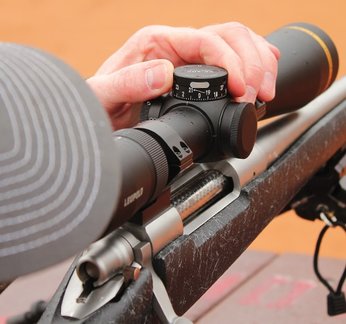 As the years click by, I’m increasingly impressed with the quality of optics a guy can get for a better and better price. Maybe it’s competition among the various manufacturers, or simply the result of advancing technology (probably both), but in either case, the consumer is the winner. A few years ago, if a guy wanted super bright, clear optics he had to pay a hefty price. If he wanted a long-range-capable scope, he could have it, but the turrets were most likely an inch and a half tall and very much in the way of everyday hunting activities. Plus, those turrets probably had 12 or 15 MOA of elevation travel on each rotation. Anything beyond the distance that would take him (most likely 500 or 600 yards) would require some impromptu math skills (and nobody wants that!).

On the cutting edge of the advancing technology, is Leupold with their brand new VX-5HD lineup. I was fortunate to try out one of the very first VX5’s, and it’s an understatement to say they are awesome! Of all the riflescopes I’ve had the opportunity to use, they are right up there with the very best when it comes to features, performance, and price. Not to mention Leupold’s “Full Lifetime Guarantee” is as good as it gets.

The VX-5HD scopes are available in 1-5x24, 2-10x42, 3-15x44, and 3-15x56. In my opinion, the 3-15x44 is the best option for a long-range hunting rifle. This particular model packs lot of big features into a scope that is 13.5 inches long and weighs in at only 19 oz. Some may feel that 15x is not enough magnification for long-range shooting, but I would disagree. I practice regularly at distances exceeding 1,000 yards with 15x magnification and have no complaints whatsoever.

The glass in the VX-5HD is AWESOME! Once again, I think you’re getting a lot more than your money’s worth here. The side focus knob dials in very easily, and the image is crisp! Extremely bright and clear, these scopes’ image quality will impress you the instant you look through them. The VX5’s feature Leupold’s “Twilight-Max” system, that boosts your ability to see in low-light conditions, and their “Guard-ion Lens Coating” which sheds water and dirt, and even resists fingerprints. All models are built on a 30mm center tube, and most come with a truly awesome turret system.

ZL-2 Turret
A feature found on the far more expensive VX-6HD line is also found on the VX-5HD, the ZL-2 turret. It features a “Zero-Lock”, requiring a small button to be depressed before the turret will turn. For a hunting application this is a great feature, and I’m a proponent of anything that will help you focus on finding and killing big animals, and keep you from worrying about your equipment. Gone are the days of worrying about turning your turret’s position inadvertently. Once the button is depressed, you have two full rotations upward, and each turn has 20 MOA! So, what will 40 MOA of elevation do? Well, for my main hunting rifle, it would take me to nearly 1,500 yards. That’s far beyond what I ever shoot, but this scope does have the capability to really reach out there! It would be an obvious choice for serious long-range shooters.

For the guys who shoot MOA and prefer the drop chart method, the factory turret has MOA marked for the second turn in a way that’s very easy-to-follow. Once you pass the first revolution, a convenient directional arrow helps you jump up to the upper MOA marks on the turret. And there’s no need to ever worry about being on the wrong rotation. Simply dial your turret back until the Zero-Lock snaps, and you’re right back to zero. While the elevation turret has a the Zero-Lock button to prevent errors, the windage turret is capped (which I really like on a hunting scope). 95% of hunters are going to hold their wind correction in the reticle, not dial the turret, so I think that was a smart move.

Free Custom Turret
Keep in mind that a custom turret with your yardage engraved is also free of charge, compliments of Leupold. Just go on their website, plug in the serial number of your scope and your specific ballistic information, and a few weeks later your custom turret will show up. You’ve got to love the simplicity of that. There’s nothing better than being able to range, dial, and shoot!

Are you in search of a riflescope that has the capability and adjustment to reach WAY out? Are you looking for a scope for a hunting rifle that doesn’t have giant turrets, and is lightweight? Are you after a high-quality hunting riflescope, but can’t spend thousands of dollars? Look no further. I’ve been extremely impressed with the VX-5HD, and recommend that you check them out. Once you factor in their warranty that’s as good as it gets, it’s clear that a VX-5HD would be a great asset this season! The VX-5HD 3-15x44 with a Wind Plex reticle carries a retail price of $899. There’s no doubt this will be a hot item, and we’ve stocked up accordingly. Give us a call to get yours coming! 435-644-2486

How to Change a turret on a Leupold VX-5HD, and VX-6HD Rifle Scope