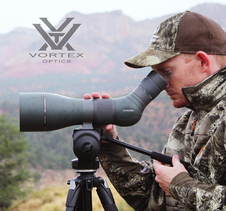 When first introduced in 2009, the Vortex Razor HD spotting scopes took our hunting world by storm, allowing hunters to really stretch the distance at a price that didn’t break the bank and wasn’t likely to cause a divorce. Offering an extremely impressive price-to-performance ratio, the image quality of the Razor HD has made them, in our opinion, a stand-alone item in their price range, and the very best value in a quality spotting scope. Since then, countless hunters have benefited from having great glass, while still keeping their heads above the financial water.

I purchased a Razor HD 20-60x85 in 2011, and it has been a huge boost for me. I’ve been able to observe and film the biggest bucks of my life through my trusty Razor. Oftentimes, animals have been miles away, and the Razor allowed me to see what they were with clarity. Once the distance was closed, a Phone Skope attached to my Razor captured the very best footage I’ve ever been able to get. Like many others, I have greatly benefitted from purchasing a Razor spotting scope, and it was well worth the money.

The announcement of the completely redesigned Razor HD spotting scopes has caused a lot of buzz, and ever since we posted a few photos on social media, our phone has been ringing non-stop with people inquiring about and buying these new Razors.

The most obvious change to the new Razor spotter is elimination of the focus knob, replacing it with the helical focus ring around the whole body of the scope. I’ll just say it – since everyone is thinking it – the new Razor design looks a lot like a Swarovski, and that’s never a bad thing. While this design change does provide a very sleek and elegant look, more importantly, it allows for optimal packing, leaving nothing to get snagged when going in and out of your pack. There’s almost no way to damage that focus ring so it loses functionality, making it a superior design to the previous focus knob, which stuck out. I’ve had several people ask about the one-stage focus versus the separate fine/coarse focus knobs on the older model. Honestly, I don’t think I can remember the last time I touched the coarse focus knob on my old Razor, so that’s a non-issue to me. This new focus ring is simple, fine, smooth, and I love it!

Another useful improvement is how these new Razors will click right into a Manfrotto tripod with no adapter plate needed. Maybe it’s not that big of a deal, but it’s certainly convenient for those of us who love our Manfrottos! It doesn’t matter how good or expensive your glass is, if it’s not rock-solid and steady, your brain will have a hard time making a clear image out of all of that movement. Even lesser quality glass looks pretty dang good when the image is completely steady. For those who haven’t used a Manfrotto tripod, I’d highly recommend giving them a try.

How good is the glass?
When we were first informed that there was completely redesigned Razor HD spotting scope, we were excited and we couldn’t wait to get our hands on it. While there are some obvious differences in appearance, what we most interested in was the performance of the glass. As soon as Ryan and I pulled the very first 85mm version of the new model out of the box, we grabbed the older model and compared them side by side. It didn’t take long to notice a difference.

At 950 yards, the colors on the new 27-60x85 Razor HD were more vibrant. This is critical in the field, as the animals we’re after are doing their best to blend in, and distinguishing between similar colors and tones is a big deal. The definition and sharpness was improved as well. The details in both the sagebrush and the rocks were better defined and more crisp, and it goes without saying how that will help you in your quest to find a big muley.

To help with top end clarity, the magnification on the new Razor 85mm starts at 27x instead of 20x (the 65mm starts at 22x, the older model was 16x). While this may seem like a disadvantage by starting off too high, the eyepiece has a very wide field of view, and at 27x, the new Razor has the same field of view that the older model has at 20x, so you’re not losing anything. Also, by starting at a higher magnification, having a tighter zoom range allows for less distortion when zoomed all the way in, and that’s a big deal, especially when you add in less-than-optimal atmospheric conditions like haze and heat waves. Any decent piece of glass looks great at low magnifications, but it’s at high magnification and long distances where you can separate the men from the boys. This new Razor is extremely impressive when zoomed in to high magnification, and would certainly earn a spot in the “men” category.

​I was really impressed with the video quality that I was able to get with my Phone Skope through the new Razor. I put the eye cup all the way in, backed off the eyepiece adapter about 3/8”, and on 60 power I had a full screen with next to no vignetting. This is another huge plus of the wide-angle eyepiece! And if you haven't used a Phone Skope yet, you are missing out big time!

Everyone I know of who had one of the older Razors loved it, and the 2016 complete revamp has made an awesome product a lot better. I commend the Vortex team for these big improvements. And it's worth noting that these new Razors are assembled here in the United States! After looking through that very first new Razor, I had no doubt that the price would come up, at least a little bit, as it was certainly warranted. The good news is that they kept the retail price exactly the same as the old model, making this a complete no-brainer-of-a-purchase. Once again, the old Razor spotters were already a stand-alone item in their price range. With these new Razors, they’re stealing the show and are leaps and bounds ahead of the competition!

If you have any questions about these new Razor spotting scopes, please don’t hesitate to give us a call. We’ve had our hands on them for a few months now and we would be happy to answer questions you may have. It’s no surprise that they are moving quickly, so if you want to get one coming, I would advise that you act quickly. Keep in mind that our prices are already great, and we’ll meet or beat any price from any authorized dealer. This is the case with Vortex optics, and with every brand that we carry, and the list is getting extensive! There’s only a short time left to upgrade optics before many of the rifle and muzzleloader seasons get started. We’ve got plenty of riflescopes, binoculars and spotting scopes in stock, and we’d love to help you find the optics that will help your season be more successful. Give us a call at 435-644-2486. 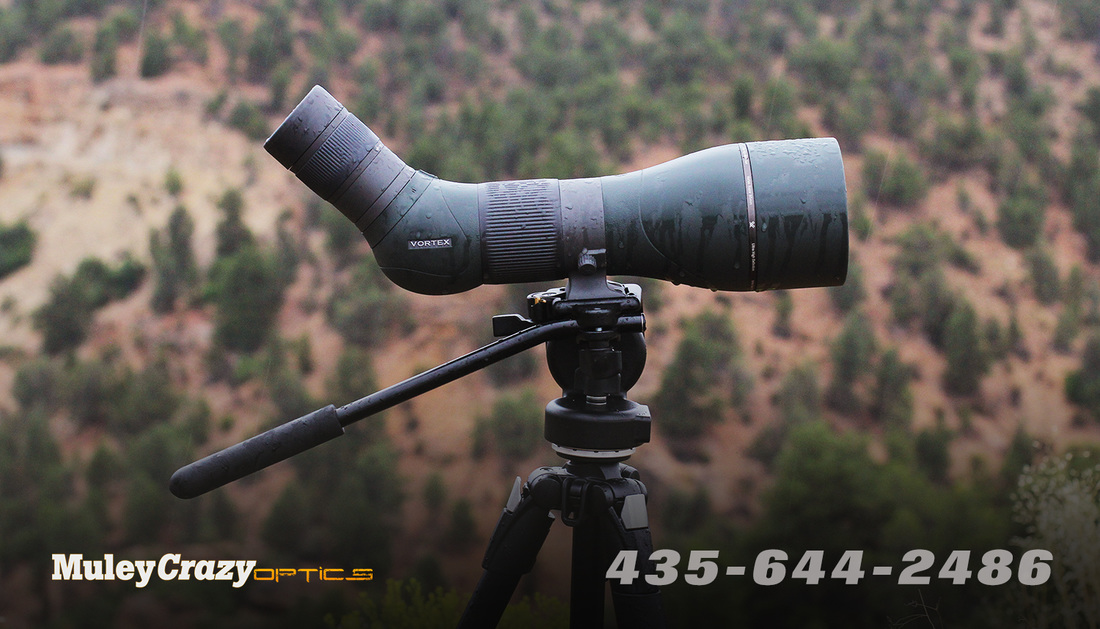