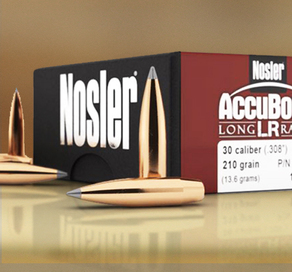 
Long-range hunting is a different game than 100-yard range practice or even traditional rifle hunting. Understanding the differences will help you recognize how Nosler’s new AccuBond Long-Range (LR) bullet has set a new standard in long-range hunting bullets.

Nosler released the new AccuBond LR bullets in 2013. The first bullet released was a 210 grain .30 caliber. Here at The Best of the West, we developed a .300 mag load, which we used in Africa, Canada and Alaska on many different sizes of animals and at a variety of distances. All observations showed the bullet’s true long-range and short-range effectiveness.

A long-range hunting bullet needs to accomplish several objectives: Be accurate, deflect the wind, maintain velocity, and never fail structurally. Satisfying all hunters is impossible, as differing theories, opinions and “schools of thought” lead to endless debate. A bullet’s construction, Ballistic Coefficient, and Operating Velocity and are all important factors used in measuring a bullet’s effectiveness at long-range. The Nosler AccuBond LR surpasses our expectations and is the best bullet for long-range performance.

BULLET CONSTRUCTION:
As a bullet passes through a rifle barrel, it spins around the dimensional center. Much like a properly balanced tire, a well-balanced bullet will spin properly and smoothly. An unbalanced bullet will spin around the dimensional center until it leaves the barrel, then it will wobble in flight as it switches its axes to spin around its center of gravity. When the bullet stabilizes, it is said to have “gone to sleep.” This only takes only milliseconds, but its effect on accuracy is clear at even 200 yards. Target bullets need to withstand pressure and heat, and be well balanced. This is most often accomplished by using a lead core and thin jacket. The lead core is balanced by uniform structural nature and the jacket must also be balanced.

When manufacturing a bullet designed with a jacket .005” (five thousandths of an inch) thick and the machines are misaligned by twenty percent, the jacket is only out of specification by .001”. If the bullet is designed with a jacket that is .030” thick and the machines are misaligned the same twenty percent, it will be out of specification by .006” – creating trouble. The out of balance bullet will have a center of gravity located away from its dimensional center. Manufacturing a bullet with a thinner jacket leaves less room for error, resulting in a well-balanced and accurate bullet.

With this in mind, we can see why target bullets use conventional construction and thin jackets. Until the introduction of Nosler’s AccuBond LR, most long-range bullets were simply target bullets, which are designed to do one thing - fly straight. Terminal ballistic performance was not a factor in their design. Though accurate, target bullet construction performs poorly in high velocity impacts. The bullet is said to “fail” because it disintegrates and loses all structure. Bullet failure occurs when the jacket and core separate.

Manufacturers have attempted to solve this issue of accurate bullets and their failures in structural performance. Designs using tougher jackets were believed to limit expansion, so designers tried using thick jackets with longitudinal slices. Others developed physical locks between jacket and core; such is the case with the classic Nosler Partition – the best of its kind.

A bullet that will expand to twice its original diameter at long range will not penetrate as well due to momentum loss. This limits the angles that game could be engaged at. A broad side 90-degree shot worked wonders at 800 yards with thin-jacketed bullets. Attempting a quartering-away shot at target angle of 120 degrees at 800 yards wasn’t adequate. Contact with bone (except the spine) is not optimal with a thin jacket at any range. At mid ranges bullets with high expansion can liquefy an onside lung, but often fail to penetrate the opposite lung. At close range, this same thin jacket will fragment because of the high impact velocities.

Bonding the jacket to the core with heat, electricity or plating is a process that has been around for some time and has almost eliminated bullet failure. Controlled expansion bullets have earned a good reputation become very popular. At long range and lower impact velocities they perform like a full metal jacket. They pass straight through with little expansion and cause narrow wound channels. A hit to the spine at long-range velocities will drop game in its tracks. Even hitting heavy bone the bullets travel through into the organs. At mid ranges controlled expansion bullets do not always fully expand and can pass directly through.

The AccuBond LR uses a copper jacket that is thick at the boat tail and tapers thinner at the nose. The bonding process that Nosler is using tends to be softer or weaker at the nose than at the base. AccuBond LR bullets recovered in game have been shown to retain sixty percent of their original weight. If they hit heavy bone they lose about the same sixty percent. My opinion is that the long nose of the AccuBond LR adds just enough strength to endure at close-range with high velocities. Comparatively, the thin nose is weak enough at long range to expand effectively. The long nose of the AccuBond LR expands faster than the thicker conventional shape. This quicker expansion enables better expansion at mid and short ranges. The bullet penetrates, expands and devastates at nearly all ranges, angles and points of impact.

My shot on a black bear at 100 yards is a great example. I used the 210 gr. 30 cal AccuBond LR and the shot angle was 85 degrees. The bear dropped instantly. After the photos, we autopsied the bear and discovered the bullet went through the 5th intercostal space and out the 6th. I hit no bone and missed the heart. We felt and found no bullet fragments yet both lungs where jelly. The long nose of the AccuBond LR had expanded very quickly on soft tissue alone. Most game, large or small, from antelope to elk, have exits.

OPERATING VELOCITY:
This is where the AccuBond LR Shines! Operating velocity refers to the speed range in which the bullet will perform proper expansion, weight retention and penetration. Generally, hunters try to get the highest attainable muzzle velocity while maintaining safety. Of course, longer ranges result in lower impact velocities. If a bullet impacts a target outside its operating velocity, it will separate (if too fast) or fail to expand (if too slow). Bullets that expand significantly will quickly lose their energy and lack penetration. This can cause a variety of issues if your target is not completely broadside at a 90-degree angle.

Long-range hunting requires special performance. A bullet must expand properly and retain structure at a wide velocity range. In the past, a bullet that retains structure at 3,100 fps would not expand at 1,400 fps. Conversely, a bullet that would expand at 1,400 fps would fail at 3,100 fps. Nolser claims that the operating velocity of the AccuBond LR is 1,300-3,200 fps. Our observation and analysis in the field through harvests confirms this velocity range to be accurate.

BALLISTIC COEFFICIENT:
Ballistic Coefficient (BC) is the unit used to measure aerodynamic performance. The higher the BC, the more aerodynamic the bullet is. The more aerodynamic, the flatter the bullet flies and the less it is affected by wind. High BC bullets better resist wind deflection because their shape permits wind to sweep across them laterally and reduces drag. Naturally, heavier bullets tend to have a higher BC than lighter weight bullets.

THE BOTTOM LINE:
The AccuBond LR offers all of the advantages of bonded bullets, in a deadly-accurate, long-range bullet. Its design improves controlled expansion over a wider velocity range and they have the highest BC’s on the market.

An MOA rifle will shoot a one inch-group at 100 yards, a two-inch group at 200 yards, three at 300, four at 400, etc.  Bullets that stabilize and “go to sleep” yield groups like a woman’s figure; narrow/wide/narrow. We have seen this regularly with the AccuBond LRs. A rifle will shoot a loose group at 200 yards, then the group will tighten and begin following the normal MOA angular pattern of distribution to extreme distances. I have begun to use the term “minute of antelope” when talking to customers. The girlish figures of the LR’s flight path will stay inside the space of an antelope’s head beyond what the 100-yard targets predict. This Marilyn Monroe pattern is even tighter with the smaller calibers. The .26 caliber AccuBond LR will shot half minute groups all the way out.

The Nosler AccuBond LR has brought new life to some old cartridges. Historically, the .25 and .27 calibers have not had the best bullet selection, but the 150-grain ABLR has changed that. The .270 Winchester has always been described as a flat-shooting cartridge. This was true with a 130-grain bullet traveling at 3,000 fps. The velocity was high but the BC was low. Hunters could hold on hair out to 400 yards, but beyond that, the low BC bullet dropped like a rock. Now there is a 150 grain AccuBond LR with a BC of .625, making the old 270 new again. This same bullet in the 270 WSM, .625 BC at 3100 fps, is big deal! Other companies have invented entirely new cartridges attempting to equal this performance.

We applaud Nosler for raising the bar in long-range hunting bullets. We look forward to the development of a great .25 caliber long-range bullet, as well as in .308 Winchester. Who said the “good old days are gone?”