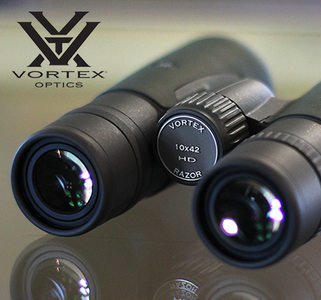 This past season I was able to spend a decent amount of time in the hills, starting in late summer scouting for Utah’s upcoming general season deer hunts. Being enrolled in the Dedicated Hunter Program, I was fortunate to be able to hunt all of the seasons, and although time wouldn’t permit me to do any archery hunting, I was excited for the muzzleloader and rifle hunts. Along with a new Vortex 1x24 muzzleloader scope, this year I made the investment in a pair of Razor 10x42 binoculars. Already having the Razor spotting scope, I was very impressed with its performance and looked forward to that same quality in a small, compact binocular. Since then, I’ve spent hours upon hours behind these binoculars and have been nothing short of impressed with their quality.

After several overnight backpacking trips in July and August with my not-so-little brother, Ryan, and good friend, Jordan, a remote wilderness area in Southern Utah revealed a handful of bucks that we would be more than happy shooting. Needless to say, we were excited to see if we could dig one out during [hunting or the? season.

We packed in 5.5 miles from the trailhead the day before the muzzleloader season and set up our camp. With several hours of daylight left, the evening was spent glassing from a knob above camp, hoping to turn up some of the bucks we’d seen earlier in the year. Although we spotted some bucks that night, the big boys were able to stay hidden from our view. The following days were spent climbing high mountain peaks in the cool, late September air and glassing the steep, rocky slopes. I was very surprised to see how well the gray-coated mule deer bodies blended into the surroundings. Unless the deer were moving, or their butt was facing you, spotting them was very difficult. This is where the color definition and clarity of my Razor 10x42’s proved extremely valuable.

Most of the deer we were spotting were at long distances and right at dusk or dawn. We consistently watched them heading to and from the thick mahogany, oaks and pines that dominated the rocky landscape. With the Razors resting on my tripod, I was extremely impressed with how well I could make out the bucks, does and fawns in the thick habitat. Many binoculars I have looked through have a dingy, gray hue and the colors seem to blend together. My Razor’s colors are sharp, brilliant and well defined. I can’t even begin to tell you how important that is when hunting in thick cover. On a side note, even with 10-power binoculars I am amazed at how much better you can see resting on a tripod and I would highly recommend doing it whenever possible.

During the muzzleloader hunt, we saw a lot of deer and were confident that the big bucks were still in the area, due to the lack of hunting pressure. We were confident that with the warm weather preceding the rifle hunt, the bucks hadn’t migrated from their 9,000-foot summer range. On October 17th, the day before the rifle hunt, I left work midday, picked up my brother, Ryan, and drove another hour to the trailhead. With our packs loaded, we made short work of the long hike?? and arrived at camp to meet my friend, Jordan, who had hit the trail early that morning. It sure was nice to arrive to see camp already set up and in good hands. With about an hour of light left, we dropped most of our gear at camp and headed to a predetermined rocky outcropping where I’d seen quite a few bucks during the muzzleloader hunt. Jordan also went to a spot where he’d seen several 160-class bucks, hoping that a bigger deer would pop up. As the shadows began to cover the landscape, Ryan and I began to pick up quite a few deer, including two bucks I had seen several weeks prior. To me this was good news, indicating that the area had received minimal pressure and leaving the possibility that the big bucks we were after could still be around.

About the time it was too dark to see anything, we began to put our gear into our packs. Just then, with his eagle eyes, Ryan spotted what appeared to be a deer emerging from the thick, ponderosa-filled canyon below us. I pulled up my Razor 10x42’s, quickly dialed the focus and discovered not only a deer, but a great buck! At that point in time, with it being all but dark, I was thankful I was looking through a quality piece of glass. I was able to get a great look at the buck, and in our book it was a no-brainer as far as general season bucks go. The buck then started raking his antlers, allowing us to back out completely undetected. Now we were excited and there was no question where we would be in the morning.

After a good night’s sleep, we arose about an hour before daylight, ate a makeshift breakfast and packed our gear. Ryan and I headed across the mountainside to the same rocky ledge as the night before, while Jordan split off and would be about 500 yards to the west on the next ridge. After waiting for it to be light enough that we didn’t have to use our flashlights, we slowly made our way through the thick oaks and out to the ledge. We started to glass with darkness still fading and picked up a few deer feeding in a clearing about 300 yards away. Through those awesome Razors, I could clearly tell that one was a unique 2x4 from the night before.

As I glassed farther up the ridge, I was able to pick out another buck, a 23-inch 3x4 that we’d seen the night before, too. Soon after that, I scanned farther up the ridge to see an obviously large-bodied deer with its head down feeding in the rocks and oak brush. As soon as he lifted his head I could clearly tell it was our buck from the night before and it was game time! He was near the top of the ridge and could easily have fed out of sight, had I not been able to see him in such dismal light conditions. Once again, I’m grateful for the awesome light gathering ability of the Vortex Razor glass.

Well, the rest is history. With the Phone Skope rolling through my Razor spotting scope, Ryan setup his rifle, dialed the custom turret on the Vortex Viper riflescope to 390 yards and hammered the buck with two great shots. It’s a great general season deer that still makes me a little jealous! Overall, the season was a great success and it’s great to know that there are several bucks bigger than this one roaming around.

Getting back to where I started, I have to say that getting those Vortex Razor binoculars was a great decision. They feel great in my hands, the focus adjustment knob has just the right amount of tension and clarity, brightness and color definition is awesome! The Razor line of binoculars is an incredible value and extremely hard to match at that price point?. With as much time as I’ve spent looking through them, I am more than completely satisfied and would recommend them to anyone.

In addition to the sleek, updated design of the newer 10x42’s, Vortex also offers a Razor 12x50 version that is nothing short of awesome! They are still easy to hand-hold and allow crystal clear glassing, with two more power and a minimal size and weight increase. For a guy wanting a little more power than the average 10x42, these are something you should really take a look at.