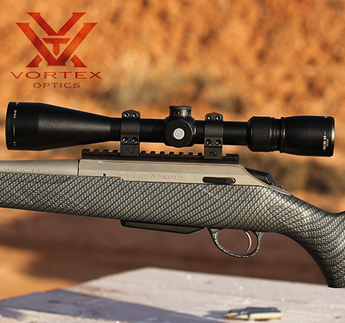 Featuring their flagship Razor HD quality glass, the new LH riflescopes offer super-bright, crystal-clear images, and weighing in at a mere 16oz., they are what many hunters have been waiting for!

The Viper lineup of riflescope from Vortex has seen tremendous success, and it should, as they offer great quality riflescopes for any hunting or shooting application. What about a scope for hunters who want step up the quality of their glass and still shoot a Vortex scope with their worry-free VIP Warranty? Until now, the Razor HD lineup of riflescopes had been designed for tactical shooters, and while they are incredible scopes, they are just too big and way too heavy for guys like myself who are trying to keep things light. Not anymore, with the introduction of the Vortex Razor HD LH (Light Hunter). From the second I heard about these new scopes, I knew one was going on my main hunting rifle as soon as possible!

I love my Tikka T3 Lite .270WSM, and this year I did a few small things to make it a little more shooter-friendly. Wanting to reduce the recoil, I bought a nice, squishy Limbsaver Air-Tech recoil pad (about $35), and also a clamp-on muzzle brake from Witt Machine ($100). Between the two, the recoil is merely a shell of what it once was; it honestly feels like shooting a .243, or less.

I put a little lipstick on the gun as well, by having the stock and muzzle brake dipped in a carbon fiber pattern by our friends at Utah Hydrographics. I was very impressed with how well it turned out, and would highly recommend looking them up if you’re wanting any custom camo or other pattern on your rifle (utahhydrographics.com); they do a great job. While I absolutely love the Vortex Viper HS LR scope that was on it (it’s now on my muzzleloader), I was very excited to step it up and top it off with one of these Razor HD LH scopes!

The new scopes are available in three models: 1.5-8x32, 2-10x40, and 3-15x42, and wanting to shoot long-range, I chose the latter option. Even this largest model weighs in at a mere 16.5 ounces. The whole look and feel of the scope is sleek and very well made.

The turret system is one of the things I like the most. They are very low profile and capped, which I really like on a hunting rifle. The turrets have a pretty stiff turn and the clicks are solid. Once you’re sighted in, one small screw on top will allow you to easily set the turret back to the zero position, ready to dial in for long shots.

The windage and elevation adjustments are ¼ MOA per click. One revolution of the elevation turret has 15 MOA, whereas most ¼ MOA turrets only have 12 MOA per revolution. While this may not seem like a big deal, to me it is, because on my 270WSM it will take me out to 850 yards (instead of 750) in one revolution. I like that extra 100 yards, because it gets me out to what I would consider my maximum effective range.

The only thing I thought I wasn’t going to like about the Razor HD LH was the one-inch tube, wishing it had been 30mm. However, after comparing its brightness and clarity with many other scopes, I actually love that it’s a one-inch tube instead of a larger 30mm tube. This is a key component in keeping the size, weight and cost of the scope to a minimum, as less metal and glass is used. Let me tell you though, the lens elements and coatings used are super-bright and crystal-clear and nothing less than you’d expect from a Razor HD Riflescope.

Ranger 1500
It’s finally here! Up until this point, the Ranger 1000 from Vortex was a great choice for both archery and muzzleloader hunters, but for long-range shooting it simply wasn’t enough. We’ve found the maximum range on deer-sized targets to be about 500 yards. This new Ranger 1500 is sweet. The laser is much more powerful, reaching out to 1500 yards on reflective targets, and what really matters is that you can range a deer at 750 - or a tree, rock or other object near the deer at much farther than that. The laser itself is actually much faster than the Ranger 1000 model, mimicking the quickness of far more expensive models from other brands.

A feature that I think is essential to a guy wanting to shoot long distances with a gun or a bow, is angle compensation. Any long distance shot up or down a hill will always hit high, how high depends on the angle. It’s crucial to know what yardage to actually shoot for so your shot is dead on. Ranger 1500 will compensate angles out to 600 yards, which is exactly in line with the capabilities of most rangefinders fetching a much higher price tag. There are even some that are far more expensive that do not have this feature. This rangefinder is a great value, and for the extra $100 bill, the Ranger 1500, at $479 retail, is a huge improvement over the Ranger 1000.

Defender Flip Caps and Dope Disks
While a custom engraved turret is very nice to have, you’re limited to one specific load, as well as a certain range of hunting altitudes. For these reasons, lately I’ve leaned more toward using a drop chart with the factory turret. I like the ability to simply plug in my new info and print off a new chart, ensuring total accuracy no matter the hunting conditions. While I’ve never been a fan of taping the drop chart on the stock of the gun, it works, so it’s tolerable.

The new Defender Flip Caps are a sweet little idea, killing two birds with one stone. First and foremost, they are super tough and will do a great job at protecting the glass on your riflescope. Secondly, one of the new Dope Disk inserts containing your drop and wind correction information fits neatly inside the cap (These are ordered from Vortex through their website’s Long-Range Ballistics Calculator – the “LRBC”). When opened, the cap has three positions: straight up, a 45-degree forward angle, and then completely flat and out of the way.


These are just a few of the new 2016 products from Vortex. Be sure to check out their website to see what other new items are available. There is a reason why Vortex has become such an in-demand lineup of products; it’s because they are continually making great products at an incredible value and meeting the needs of the hunting and shooting world. Factor in the unsurpassed VIP warranty, and it’s easy to see that they really value and appreciate their customers’ business, and stand behind their products.

If you have any questions about the products in this article, or any optics questions at all, don’t hesitate to give us a call. We understand how important quality optics are in trophy hunting, we’ve helped hundreds of our readers and subscribers find the glass they need to maximize their time in the field. We carry all of the best hunting optics and MuleyCrazy’s prices won’t be beat! Call 435-644-2486.